Ulrike's Trail is a pleasant walk along the marked hiking trails around Třebívlice. Třebívlice lies in the Central Bohemian Uplands Protected Landscape Area 13 km west of Lovosice. Ulrike von Levetzow, the great love of poet J.W. Goethe, fell in love with the 72-year-old at the tender age of 17. She never married. After her stepfather died, she inherited the Třebívlice estate, which she looked after until her death. She died in 1899 at the age of 95. Any tour of Třebívlice should include Ulrike's tomb in the local cemetery and the museum at the former chateau gardener's house.

From the museum, I set off along the blue trail around Kuzovský Stream to the former pub known as Granátka, reaching the village of Dřemčice from the field's path. From there, I continued along the yellow trail, but turned right immediately after the final houses and climbed the unmarked forest path to the rocky peak of Kuzov, which offered a beautiful view, especially to the south-east of Hazmburk, and of the Central Bohemian Uplands peaks (Lešenský vrch, Hradišťany, Solánská hora). At the foot of Kuzov are the garnet gravels, a deposit of Czech garnets. They can be found in the silts of Kuzovský Stream, which the locals call Granátka (Garnet Brook). I went back up the yellow trail and followed it through the village Staré to the next village, Leská. From there, I followed the red trail, returning to Třebívlice along the road.

The main source of pyropes in the Central Bohemian Uplands is not Bota near Měrunice, but Linhorka (A) near Staré. Staré is a small village about 2 km north of Trebivlice. On the way to Staré from Třebívlice, drive past apple orchards on your right. Halfway along the road, pass the turnoff to Leska. Then continue over an inconspicuous horizon, and the orchard will end on the right. A view of the Kuzov Nature Reserve will open before you. A little further to the north is the village of Blešno and its large block fields. About 100 m from the fence of the orchard is a discreet turnoff that leads to Kuzov (B). This is the best place to leave your car while exploring the areas where garnet is found. 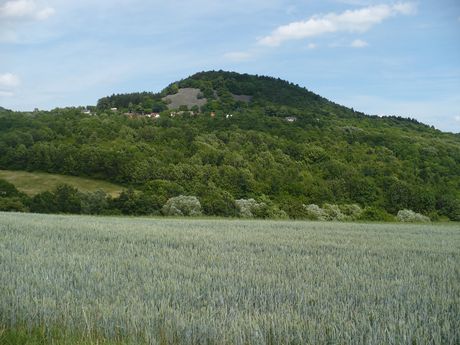